“You’re a weird kind of girl. I never thought someone like you would like that sort of thing.”

I’m never sure whether to take that as a judgement or a compliment when someone tells me that. I mean, I didn’t realise that cars, skateboarding and sci-fi were restricted to the male species? Oh, but if you were a girl who liked it too, it’d be imperative to possess at least one tattoo, piercing, a rebel attitude and attire featuring a few slit-cut denim pieces.

It’s almost like the 21st Century is a place where you can embrace every identity that you are, and other times you realise there is still a gender stereotype people expect you to meet. You are one extreme or another, and anything in-between is unheard of.

Since the Suffragettes fought for women’s “rights” and “equality”, it has brought much progression to the female role in many ways. Yet, sometimes it almost feels like the contemporary view is not that of equal measurement, rather that there are now further subsidiaries in the societal hierarchy. Allow me to elucidate, before you decide whether I’m pro/anti- feminism, because I’m about to tell you that I’m neither. Shock! Horror!

Okay, so, let’s get things straight. Yes, I’m a woman. Yes, I believe women and men should have equal rights. No, I like shaving my armpits, and you can’t stop me. No…I do like rock and metal music, but have no desire to shave one side of my hair off…What on earth brought this on?

I used to believe that feminism was about bringing men and women on the same level. Now, there is a multi-storey of levels for different types of women! Actually, that’s a helpful analogy, so we’ll go with that. Imagine if you were looking for a woman and she fell into a certain category, much like when you go to a shopping centre and know certain levels have different shops on. So, we’re hitting the mall, I’ve brought 25 spare plastic bags with me (I ain’t paying 5p, no way hosay) and I’m going to find myself a self-sufficient woman, who is good at time keeping, immaculate looking, has a good brain but is also independent and fun. OH, and this woman doesn’t believe in any movement or comparisons, she purely believes that she is who she is, and so is everybody else. What floor do I go to?

Truth is, I’m not going to find that. You know why? Because there’s almost more difficulty now to express your whole self, without one part of your identity being scrutinised or moulded to fit an ideal. Heck, we suppress ourselves because we’re scared to expose something that won’t be in the majority favour (and that majority being within whichever social group you fall into). So, even though women are now more noticeable working in places like the motor trade, or the marines and army, and, wearing trousers instead of just being paraded as dollies, our fight for equality is not with men, but with other women. Sure, there are some chauvinistic men out there, and there always will be. However, with such a powerful alpha-ego now bestowed upon us as a gift from the feminist movement, we now have no set boundaries. In fact, we haven’t just turned the tables; we’ve added a whole new set of metaphorical furniture to the equation!

What initially started as a movement of utopia has now become a division of character. Women and men are equal, but are all women equal to other women? How can we solve this paradox if there is no line? Can there be a line that does not defy us as free agents? Will our freedom be our corruption?

Ockham’s razor quoted that “The right answer is often the simplest one.” Thus, our over-analysis is probably our Achilles heel, and maybe we should just accept that our equality is not one formed by a hierarchy, but just that of truth? Like you are human, and so am I, and that is the truth. I am not more human than you because of a subjectivity such as beauty or intellect. Maybe we just are? Armpit hair or no armpit hair, love of lipstick or love of baggy hoodies, can we not all just be variants of the same matter, with the same rights?

One thing I’ve learned is that the truth is immutable. Feelings are not. Therefore what we “feel” is “right” is a pointless and contradictory indoctrination. Thus, being anti/pro feminism is an empty juxtaposition. It is like arguing with your own reflection.

Anyway, haven’t we got better things to do than berate each other’s outfits and haircuts? In fact, this has been pretty heavy, so I think it’s time to take 5 and laugh at the resemblance between Trump and the Annoying Orange. 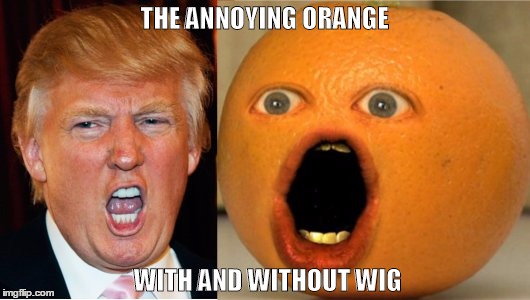 Lastly though, just to wrap this topic up, this saying is always apt:

“Be yourself, because those who mind don’t matter, and those who matter don’t mind.”

That is definitely a motto to live by.