I chortled when I saw a dog with the same curly hair as my mum’s. It’d bring many a grin to my face if I saw her walking a dog that was her spitting image but in the canine form. But you know, it’s not that strange a concept. We as humans do love a bit of familiarity, and if we can’t express that with our pets, then what can we express it with? Well, to be honest, by the look of some of these celebs and their motors, it seems pretty apparent that that concept has just been expanded. Not only do these celebrities have the same surface looks as their cars, but their personalities match what’s under the bonnet too! Take a look and chuckle. 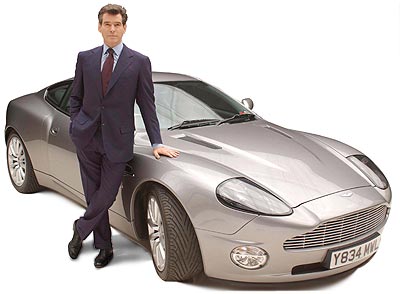 1) Pierce Brosnan: What else for the 007 agent than an Aston Martin Vanquish? After all, it is “the” Bond car. It’s smooth, slick and stylish, just like Pierce Brosnan. That and it’s topped with a classy kind of power. This is no V8 noisy boy toy. This is a real man who can not only compete with the boys but does so with sophistication. Shaken, not stirred. 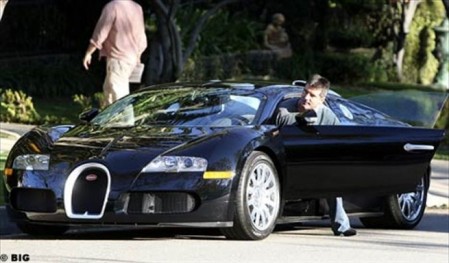 2) Simon Cowell: Well is it any wonder that Mr Megabucks has the most in-your-face hypercar? The Bugatti Veyron is famous for its claims to speed and acceleration. It is in the hall of fame for such engineering and is the top dog of car brands. Much like its owner, it’s pretty much as elite as you get in their field of expertise. And even if you don’t like it, well it costs like 2 million quid, so I don’t think it cares what you think anyway. NEXT!

3) Fergie: For a woman who knows what she wants and won’t take no s**t, this Hummer is probably as badass as you can get. It’s powerful, versatile and not be messed with; much like its owner. Fergalicious. 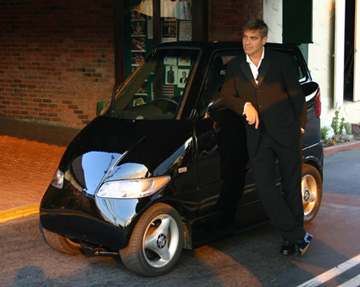 4) George Clooney: Now this one kind of had me tilt my head in confusion. You’re seeing it right, yes. It’s that Mr Swoony with a not-so-sexy two-seater electric Tango 600. It doesn’t have any matching aesthetics to its owner, but maybe the eco personality of the car matches George’s own depths of care and the lengths he’ll go to, to prove them? After all, he’s a dedicated soul. The car is beyond hideous though and it looks like it got squashed in a door.

5) Hugh Grant: What else for the posh bloke who always gets what he wants and knows everyone falls for his pretty face and charm, but the much branded “toss**s car” the Audi R8? Personally, I think they’re both great, as an actor and as a car. But they both have pretty colourful reputations, so it’s a definite match made in vehicle heaven.

6) Wayne Rooney: …*bursts into fits of laughter* HAHAHA! Wow. Okay, so Wayne probably doesn’t have the Blue-Rinse-Brigade Ford Ka anymore, but heck does it suit him more than those flash sports cars he buys now! Honestly, this guy has been in the papers for some outrageous sexy stuff, but you’d never expect it cos he’s like…Wayne Rooney. Much like when you see a souped-up Ka with a turbo and scaffolding for an exhaust pipe that goes like a lightning bolt. It’s still a Ka…how ridiculous to do that to a granny-mobile. I mean, he should’ve kept this car. It’s certainly my favourite match of the day.

7) Paris Hilton: WHAT IS THIS ABOMINATION?! This is some kind of blasphemy in the name of all that is holy in the car world! This poor Bentley Continental GT has had its integrity quashed by Barbie pink paint, its sophistication removed by being pimped like a Fab ice lolly and just generally humiliated by being owned by an utter “heir” head. It’s a shame because there was such potential, but it has been wasted by disguising them with airy-fairy goals. Ahem. My opinion purely, but jeez, Bentley must be spinning.

You know I always end my articles referring to tea at some point, but I genuinely feel so dry in the mouth from all the anxiety caused by that last picture that I think I need one! I’ll make enough for you too, cos no doubt you’re in the same boat as me. Then we can refer back to Clooney’s car and laugh about it, cos even though we can’t afford a Zonda or anything, at least we have enough wits about us to buy something that doesn’t look like an old boy’s flat cap.

"Who looks outside, dreams. Who looks inside, awakes." - Carl Jung 💭 Creativity is often platformed on pensive moments - thinking about your own life, summarising your experiences and collating them into a mental portfolio, slowly piecing it all together in order to know how to one day bring it to life. This type of self-awareness and ability to think critically was exhibited by the famous novelist, Charles Dickens, who would walk for miles simply to dive into his own mind. These walks along the Broadstairs coastline even provided him with narratives for some of his books! If you share this introspective quality, you also possess an important trait of a creative genius.
"I have no special talent. I am only passionately curious." - Albert Einstein
"Strengthen the female mind by enlarging it, and there will be an end to blind obedience." - Mary Wollstonecraft (A Vindication of the Rights of Woman, 1792)
"We are what we repeatedly do. Excellence then, is not an act, but a habit." - Aristotle
"The question is not what you look at, but what you see." - Henry David Thoreau
3 Untranslatable Japanese Words That Beautifully Convey Why Nature Enriches Our Lives 🍃🌷
Loading Comments...
Comment
×
<span>%d</span> bloggers like this: